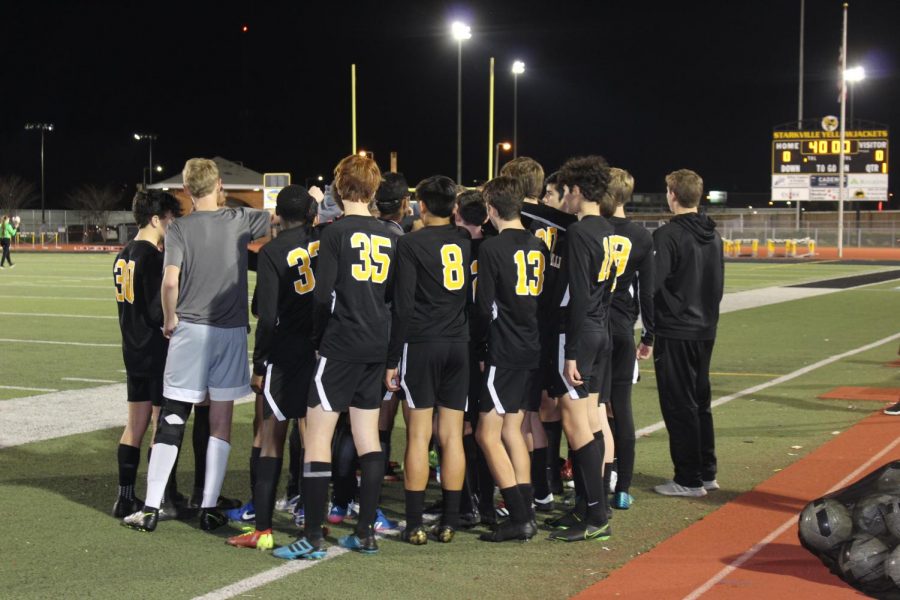 STARKVILLE, Miss., January 28, 2020 – The Jacket soccer team took on Clinton for the first round of playoffs at Yellow Jacket Stadium. The Jackets fell to Clinton 0-2 during the second half of overtime.

“The team played well together. We communicated and played with a lot of heart, a lot of effort. I’m so proud they came together and had a good year. We were just unlucky tonight.” Head Coach William Wells said.

Out of the eleven players on the field, five of the starters are freshman. Overall the team is made up of underclassmen, eighteen freshmen and five sophomores who will have to step up now that the seniors are gone.

“The young guys jelled with the seniors, the seniors helped them and we communicated on and off the field,” Wells said.

This was the first time the team had been to playoffs since 2013. The team was undefeated in district play and had a 11-4 record before this loss.

Senior Peyton Rodgers has been on the team for six years. He made four blocks that delayed the loss until overtime.

“We improved from the last time we played Clinton by getting better every game and practicing, working hard. I couldn’t be prouder of the team; we got better and competed. It sucks that we had to lose but somebody’s got to,” Rodgers said.

There were six seniors on the team this year. Combined they had an impressive 38-22-1 record over their years on the team.

Being the first time the team had made it to playoffs since before the seniors were on the team, senior Christian Leach, player since seventh grade was proud of the team and had a positive outlook for the future.

“It was good to be able to play in the playoffs. It’s not the results we wanted, but juniors and sophomores have to come back and be leaders together,” Leach said.