Speech and Debate compete in the JCFL national qualifiers competition 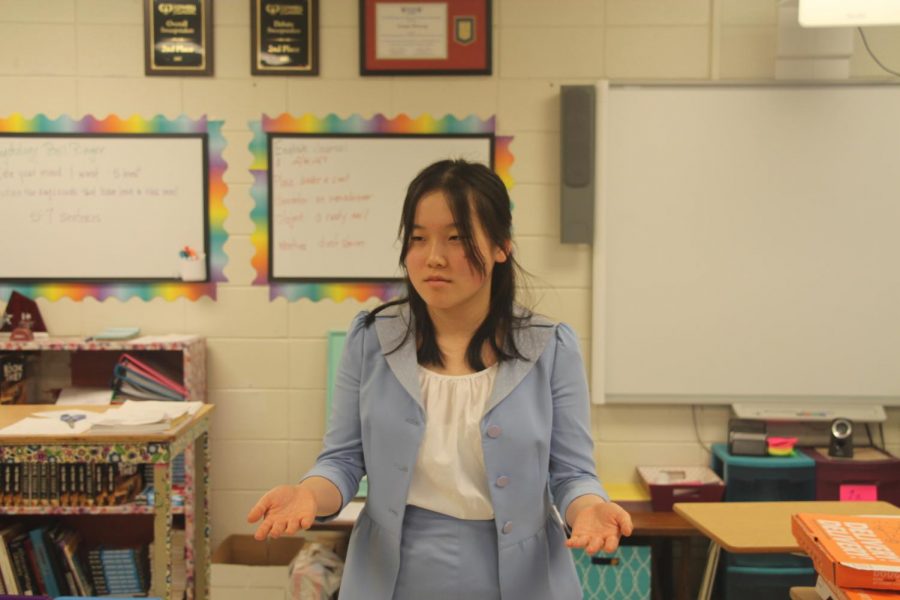 Jessica Yan practices for her duo interpretation performance at the speech and debate competition.

Competitors in duo interpretation had months to prepare a piece lasting under ten minutes. Amy Zhang and Jessica Yan interpreted the book Battle Hyme of the Tiger Mother by Amy Chua.

“In order to prepare for my events, I have to choose a piece that I know will fit me well for the role I play in the piece,” Yan said.

Yan said once she chooses those pieces, she memorizes different parts every day until the day of competition so she can comfortably perform her pieces to the judges

“This is the national qualifiers, so only the top six in each of the events will be going to Chicago in May,” said speech and debate adviser Sonya Harvey.

Harvey said in order to prepare her students have been doing a lot of research ahead of time and practicing their performances because some of it is debate, speaking, or acting.

Debate members participated in five rounds to get down to the six qualifiers while in speech two rounds of competition followed by semi-finals determined who passed to the next round. Depending on which event competitors are participating in the speech lengths vary. In Speech events a standard speech is ten minutes long while in debate, they can last around an hour and a half.

The National Speech and Debate Association comes up with topics nationwide to debate about.

“Each speech and debate member for Starkville High choose three events to participate in along with who they wanted to work with.” Ben Harvey said.

Debate member Vivek Nagarajan said since he is new, he never knows how he is going to perform. “I haven’t met a lot of people that I could potentially be going against, so this should be pretty difficult,” Nagarajan said.

Members of the Starkville High School debate team have learned tp adapt and work in all kinds of new scenarios. The Qualifiers will be taking a trip to Chicago in May.