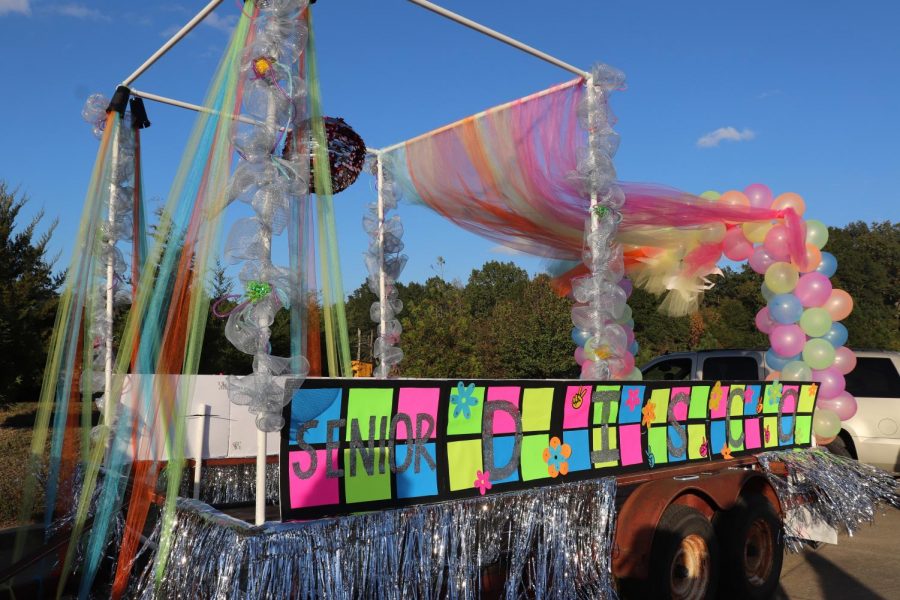 The senior class float is disco themed in the homecoming parade.

STARKVILLE, Miss., Mon., November 2- Students look forward to participating in homecoming activities each year to celebrate the Starkville High football team and the elected court of maids and beaus. The week of homecoming usually consists of hallway decorations, homecoming parade, car show, dodgeball game, school dance and the presentation of maids during halftime of the game.

The events of Covid-19 caused the original homecoming game to change because the opponent, Greenville, cancelled their season. The Jackets were set to face Laurel instead, but the game was cancelled. The festivities still began the week of the previous date, starting with the homecoming parade.

Students in each class decorated a float to indicate the music genre theme; other floats in the parade represented the academic houses and interest groups in the school. Members of JROTC, band and cheer also walked in the parade, but the events of coronavirus caused the entire football team, coaches and some maids to quarantine meaning they could not participate in the parade. Ultimately the quarantine of students along with the forfeit of the opponent created a cancellation.

Even though the game was cancelled, students continued to celebrate and participate in class events. The next weekend, students decorated the hallways of SHS to go along with their music genre theme including rock, hip-hop and disco.

Students looked forward to a student versus teacher dodgeball game on Wednesday of homecoming week, but rain caused the event to be cancelled. The car show took place October 29.

Madison Shultice won overall for the car show. “Going into the parade I had no intentions of winning or even placing; I just wanted to get participation points for my class,” Shultice said.

The homecoming dance was scheduled for the Saturday after the homecoming game but because of Covid-19 and the many students and football players quarantined the dance was cancelled.

Kate Dickerson is the Student Body President. “I was disappointed when I found out the dance would not be happening, but I know the administration made the decision in the students’ best interest,” Dickerson said

Although many events were cancelled due to the pandemic, there will be a community wide pep rally, “Jackets Unite,” to celebrate the football team, homecoming maids and beaus November 4 at 6 p.m. at Yellow Jacket Stadium.