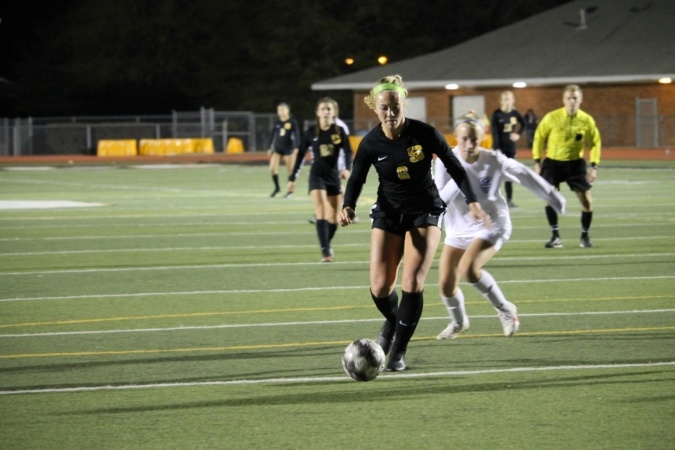 Meg Rodgers prepares for a hat trick, tipping the score 9-0.

STARKVILLE, Miss.–The Lady Jackets took their second win at a home district game Wednesday, with a final score of 9-0. Sophomore Meg Rodgers scored the game winning shot with 29 minutes left in the second half due to the mercy rule in place that automatically concludes the game when it has reached a seven-point differential.

Sophomores Emma Wilson and Meg Rodgers scored hat tricks which are three points each during the second quarter, bringing the score up to 7 in the first 15 minutes of the half.

Rodgers said this game prepared her for playoffs.

Rodgers said the teammates competed against each other and saw this game as a chance to showcase their talents and to be selected for a playoff spot.

Sophomore Julia McPherson said she is excited for playoffs.

“I’m glad we ended the regular season on that game. I think we have a real chance to do good in playoffs,” McPherson said.

McPherson will miss the lowerclassmen teammates who will not be at the playoff games. “Since we have some of the junior varsity girls that don’t get to play in playoffs. It will definitely put a dent in our support system.”

McPherson said her main concern is that the team could be challenged in playoffs because they can be intimated sometimes, especially when we are “up against big opponents like Oxford and Tupelo.”

“If we work together during playoffs, I think we can finish the year strong.” Rodgers said. “I have faith that we will be able to succeed and have fun doing it.”

With four wins under their belt, the team prepares for the playoff game versus Oxford Monday at 5 p.m.