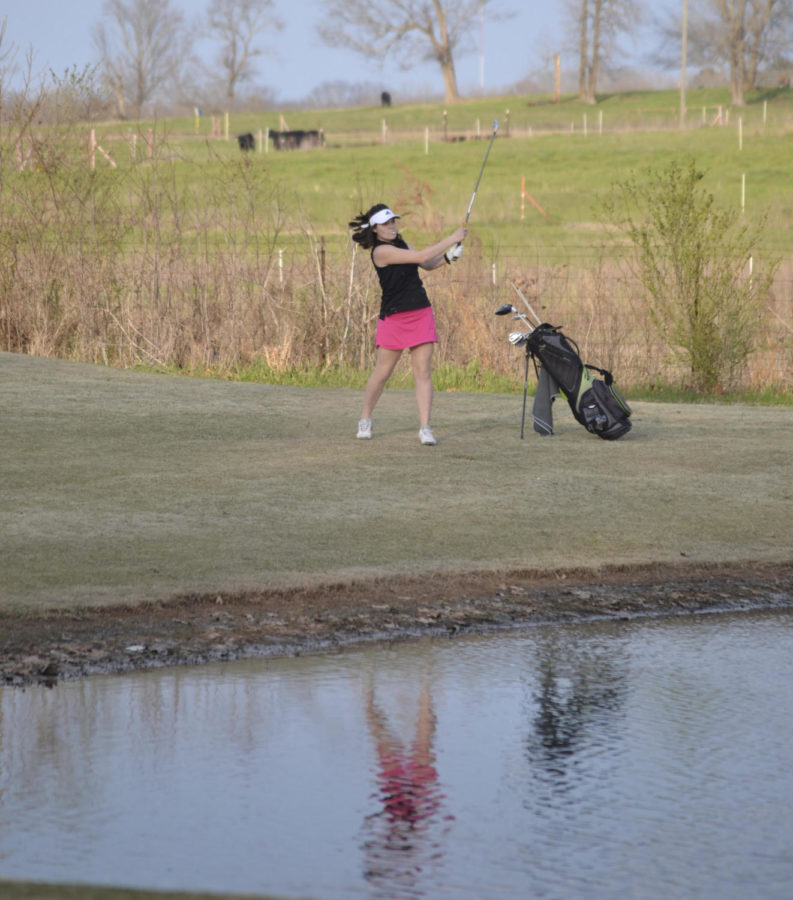 Anna Richey chips over the hazard on hole five.

In their first home match at the Starkville Country Club, the girls’ golf team finished second to Choctaw County with final scores of 120-121 in a competition with Choctaw County and Caledonia.

Head coach Angela Hobart credits this loss to the team’s youth and inexperience, but hopes to see them improve throughout the season.

“Being new to the game, the girls struggled with pace of play and their short game. Off the tee, they hung in there with the competition but we have to improve around the green,” Hobart said.

While Hobart notes the team’s inexperience as a factor in their loss, she credits them with a well-played match considering their skill set.

“The team is young and inexperienced this year. Most have never played a full 9–hole match. They played about like I expected and had a few really good improved shots at times.”

Anna Richey has been on the team for the past three years, and now serves as team captain.

In her role as captain, Richey tries to keep practices light and fun while still getting in the practice that she knows the team needs.

“I like to keep practice fun for everyone. I try to make jokes to keep things interesting while also just talking to the players to hear about their lives. I want everyone to be as comfortable as possible,” Richey said.

Though the match didn’t let the team start off the season the way they wanted, Richey hopes to help the team improve through practice to help the girls cut down on their scores.

“I feel like we need to work on cutting scores down. We have the technique; we just need more practice on the course.”

Richey also notes current construction at Starkville Country Club as a new obstacle for the already inexperienced players, but looks at the positive lessons it allows for.

“It’s definitely harder to play those front holes when there is construction, but on the bright side the new girls can learn about what you need to do when a man-made obstacle is in the way of the ball,” Richey said.

Up next in competition, the Lady Jackets play New Albany at Oaks Country Club March 25.