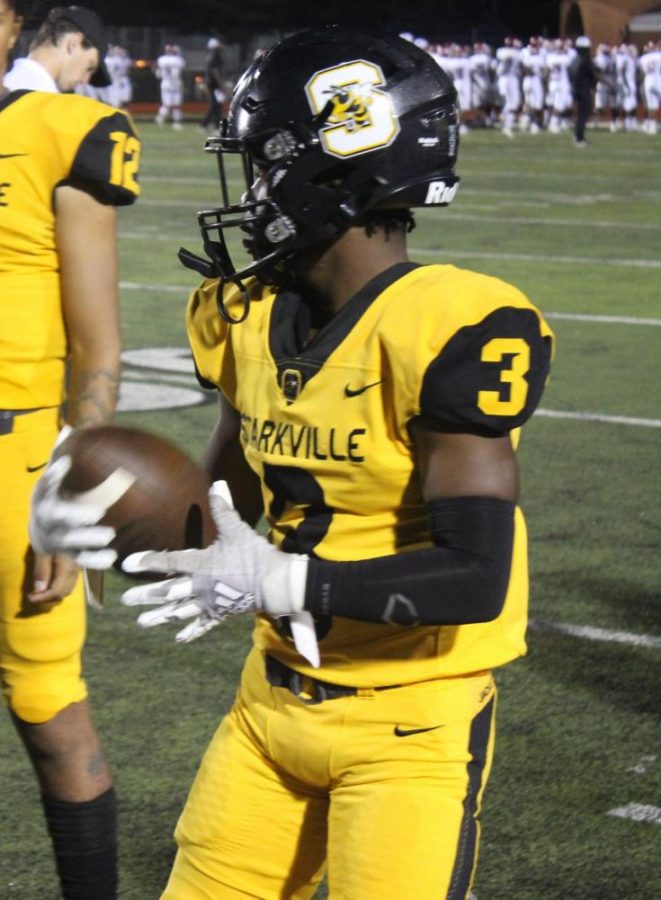 Qua Jenkins warms up during halftime.

STARKVILLE, Miss., Sept. 17- After barely over two minutes of play, Starkville took to the locker room in their game versus Louisville, a homecoming to remember. Enduring an hour and a half long delay, the Jackets and Wildcats returned to the field for play with 9:48 on the clock.

The weather was a huge factor for both teams on the turf, but the Jackets prevailed with a narrow 28-23 victory.

With 6:15 left to play in the first quarter Louisville’s Jace Hudspeth threw for the first touchdown of the game putting the home team in the deficit.

Starkville responded with a 31-yard touchdown from Trey Petty to Jonthan Lampkin with four to go in the first. At the 2:03 mark, Petty shed a tackler on third and short and ran it in for a 15-yard touchdown. Junior Josh Eaves’ PAT was good. At the end of the first quarter, the score was 14-13 Jackets.

With what felt like a slow second quarter, sophomore running back, Tyler Nichlos, ran in for another Jacket touchdown. With a big stop from the defense, the Jackets held the Wildcats to a 25-yard field goal ending the first half leading 20-16.

With defenses battling in the third, Hudspeth threw his third TD late in the third quarter to put Louisville back on top 23-20.

Running back Jordan Mitchell led the Jackets in an 80-yard drive with 8:16 left in the ball game. After a fumbled snap, Petty ran in for the 2-point conversion. Jackets led 28-23 with 4:29 left of play.

To top off the big win on homecoming Braylon Burnside sealed it off with a last-second interception taking the Jackets to a 4-0 record.

“I dropped a touchdown earlier in the game and this game winning interception made me feel like I made it up to the team,” Burnside said.

The next contest will be Friday on the home field versus 6A #1 ranked, conference opponent, Madison Central.