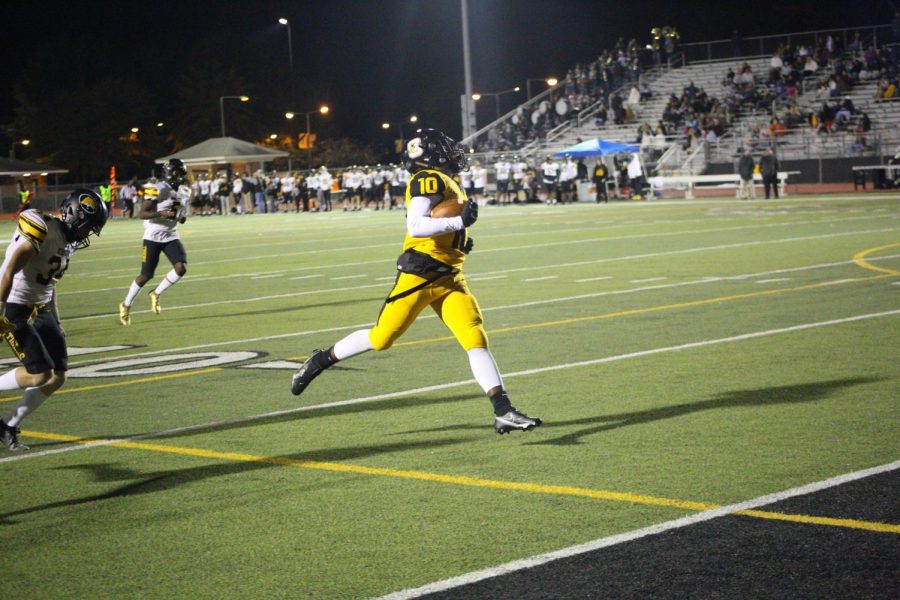 Tyler Nichols runs in for a touchdown.

STARKVILLE, Miss. (November 12) -The Starkville Yellow Jacket varsity football team hosted the first-round playoff matchup against the Hernando Tigers. The Yellow Jackets used the second half to pull away, as the Jackets defeated the Tigers by a score of 63-21.

Coming off last week’s win against Grenada, the Jackets were poised to keep the winning streak going against Hernando. With it being playoff time, this would make the win sweeter. This goal did not come without its struggles though, as the game stayed close with both teams trading touchdowns. The Jackets went in to halftime leading 28-21.

The Jackets came into the second half with the mission of stopping the Tigers from scoring and forcing turnovers. They were successful in doing so with the help of junior defensive lineman, Jonathan Methvin who had multiple quarterback pressures.

“Well, it was necessary of course. Honestly, we should be getting this many (forced turnovers) every game. We had a slow first half, we had to come back, so we knew we had to get some turnovers,” Methvin said.

The Yellow Jackets came into the second half on fire with two quick touchdowns by Jordan Mitchell. Making the score 42-21 going into the fourth quarter.

The defense continued their dominance in the fourth quarter forcing two more turnovers including one fumble. If you ask the team, they still think they can get better for the next game. Mason House is a junior defensive lineman.

“We can improve communication between back end and frontline defense,” House said.

This was a complete team effort as the reserves contributed to the scoring including a pass to Quay Jenkins from senior quarterback Jaquez Harris in the fourth. Grady Stewart is a junior long snapper for the Jackets.

“I think we did really well,” Stewart said.

The Yellow Jackets defeated the Hernando Tigers 63-21 to advance to the second round of the playoffs. In round 2, the Jackets will take on Southaven with home field advantage at Yellow Jacket Stadium, Friday at 7 p.m.